I had The craziest day yesterday. I went to Chinatown to do groceries and this man was passed out on the road and in front of a bank and the Italian Embassy driveway.

Literally thousands of people walked by this man passed out on the street. I saw a police officer riding by on a bicycle and I stopped and waved him down and all he said was I got to go and then just took off on me. So me and another gentleman decided to get together pick the guy up & take him to the wall of the bank in the shade, better than being on the street. I had to put handfuls of his change back in his pocket.

I quickly grabbed groceries and when I came back five minutes later he was in the exact same spot passed out with again tons and tons of people just looking and walking by and not helping. I went inside the bank and told them to call Someone to help this guy. And they looked at me like I was just being a complete pain in the ass, like that was not their problem. They eventually said they would call 911.

I try to speak to the guy again and I told him to please get off the road and then he drank rubbing alcohol and said that he was fucked. He got up and stumbled off and I regret not calling 911 myself to get this poor guy help. It saddens me it's not easier to get help when people need it.

And considering where he was laying during rush hour I should've called 911 I regret not doing that.

I don't think the bank called at all. 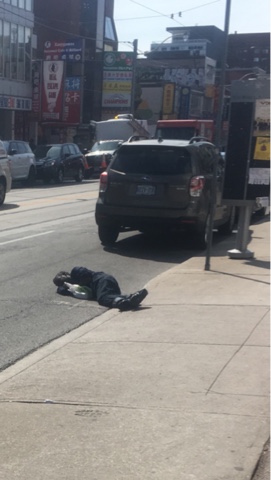